This week the guest judge is the wonderful Olivia Newton-John.

Hayes and Emma chose to do Jazz Routine to “You’re The One That I Want” in the movie Grease and it was very good! He embodied the character and it was fun to watch. He lost it a little bit on the Shake Shack and his rocks were too big. He needs to work on footwork and finishing his lines. They scored 8,8,8,8 totalling 32.

Andy and Allison chose to do a Jazz Routine to “Good Morning ” in the movie Singing In The Rain and it was awesome. It lost some energy towards the end…it was almost like they had no choreography left to do. I loved the beginning and the middle. Great interpretation of character and movement. They scored 10,10,10,10, a perfect score of 40.

Alexa and Mark chose to do a Cha Cha to “Slave To You” in the VMMA with Britney Spears and it was very good. She can really shake it with the best of them. She needed to be more grounded and need to exude more sexuality. But overall well done! They scored 8,7,7,8 totalling 30.

Bindi and Derek chose to do a Rumba/Mambo to “Time Of Your Life” from the movie Dirty Dancing and it was awesome!! Definitely brought back some wonderful memories. They both exuded the characters. They scored 10,10,10,10, a perfect score of 40.

Paula and Luis chose to do a Jazz to “Vogue” to Madonna’s MTV Music Awards and it was so much funny!! It was no Madonna with sexual tension but she had style. They scored 6,6,6,6 totalling 24.

Carlos and Whitney chose to do a Hip Hop/Rumba to “Pony” from the movie Magic Mike and it was awesome, I loved it!! Great choreography!!! It was very tasteful. He had great body isolation. Awesome! They scored 10,9,9,10 totalling 38. 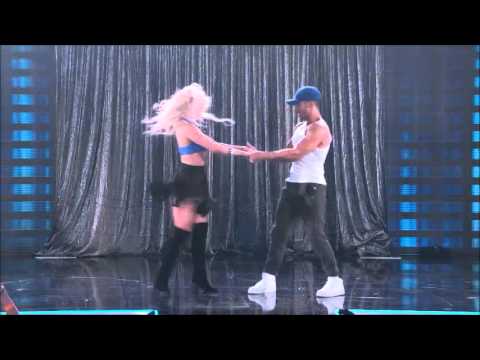 Alek and Lindsay chose to do a Jive to “Jail House Rock” from the movie Jail House Rock and it was very good. He looked a little awkward sometimes but he did do some good movements. His kicks were flat footed and needs to work on his hip thrust. They scored 8,8,7,7 totalling 30.

Tamar and Val chose to do a Jazz Routine to “Rhythm Nation” by Janet Jackson and it was absolutely amazing!! Great routine and it was a great rendition of the original. Well done! They scored 10,10,10,10,10, a perfect score of 40.

The couple leaving tonight is:

Don’t just sit at home and watch….REGISTER TODAY & learn to dance just like your favourite Star on Dancing with the Stars!! 🙂