Nick and Sharna danced an Argentine Tango to “Bring Me To Life ” by Evanescence as Frankenstein and it was well danced. He was a strong man in this dance , he showed strength and passion for a regular tango, but the Argentine tango needed more hooks and flicks. They scored 8,8,8 totalling 24.

Hayes and Emma danced a Slow Waltz to “Once Upon A Dream ” by Lana Del Rey as a Werewolf and it was very good . I liked the way it moved around the floor. The frame is getting better, though his shoulders are still a little to high. His footwork is better, he just needs to connect to the floors when driving heels. They scored 8,9,9 totalling 26.

Alexa and Mark danced a Paso Doble to “Hora Zero” by Rodrigo Y Gabriella as Edward Scissor Hands and it was very, very good!! Not a traditional Paso but well danced. She portrayed the part well and she shaped the lines well. They scored 9,9,9 totalling 27.

Tamar and Val danced a Foxtrot to “People Are Strange ” by The Doors as in Creepy Carnival and it was very good but it didn’t feel like a foxtrot to me. I would like to see a traditional foxtrot. The top line was beautiful but the transition between in out of holds was not smooth. They scored 8,8,8 totalling 24.

Andy and Allison danced a Paso Doble to “The Beautiful People” by Marilyn Manson in the Underworld good. His shoulders were slumped forward and his hips needed to be thrust forward instead of back. He had sharpness and quickness but he needed to finish his lines better. They scored 9,9,8 totalling 26.

Bindi and Derek danced an Argentine Tango to “Cry Little Sister ” by The Lost Boys as a Vampire and it was amazing!!  I absolutely loved it!! Fantastic hooks and flicks and lifts!!! Awesome dance!!! Well done ! They scored 10,10,10 totalling 30.

Alek and Lindsay danced a Viennese Waltz to “Haunted ” by Beyoncé as in the Woman In Black and it was okay. He had a much better frame and commitment to the dance. He was in character, but he need to work in his footwork and follow through. They scored 9,8,8 totalling 25.

Carlos and Whitney danced a Paso Doble to “O Fortuna ” by Carmina Burana as in Phantom Of The Opera and it was very good. It lacked shaping in the hips and posture. He was in character and he very nice staccato movements. They scored 9,10,9 totalling 28. 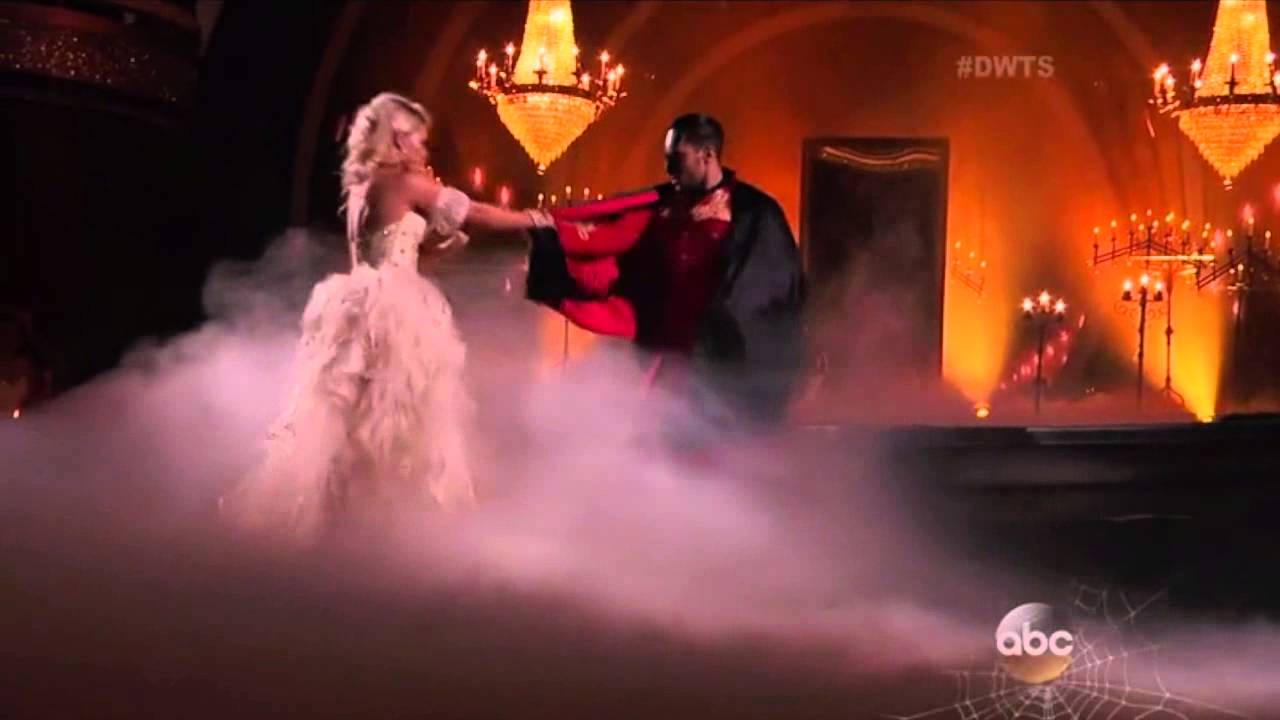 Team Freestyles are next:

Bindi’s Team Who You Going To Call: Bindi and Derek, Alexa and Mark, Carlos and Whitney, Alek and Lindsay danced to the song “Ghost Busters” by Ray Parker Junior and it was very good but it didn’t compare to the other number. It was fun but the individual danced were week. They scored 9,10,9 totalling 28.

Don’t just sit at home and watch….REGISTER TODAY & learn to dance just like your favourite Star on Dancing with the Stars!! 🙂

This entry was posted in Coaches Coming!. Bookmark the permalink.