Posted on May 21, 2015 by Arthur Murray Woodbridge

ABC has also changed the schedule and has the double elimination taking place next week.

Riker and Allison danced a 1920’s Quickstep to “Wiggle” by Scott Bradlee and Postmodern Jukebox and it was fantastic! It was quick and he was light on his feet. They had a tight frame and great topline with swing in his movement. They scored 9,10,9,9 totalling 37.

Chris and Whitney danced a 1940’s Foxtrot to “5 Minutes More” by Frank Sinatra and it was good. I would of preferred more time in frame and more material. He did very well for what was given to him. Needs to work on footwork. Overall good. They scored 8,7,8,8 totalling 31.

Rumer and Val danced a 1960’s Jive to “Dear Future Husband” by Meghan Trainor and it was fantastic. Fast and fun! Just needed to work on the free kicks. The foot wasn’t toned. The choreography was good, it needed better connection. They scored 8,9,9,9 totalling 35.

Noah and Sharna danced a 1970’s Jazz Routine to Super Bad” by James Brown and it was good. He really was able to shake his hips and have some great single movements. Half way through he started to think about his movements and it showed on his face but then he got it back on track. They scored 10,8,9,9 totalling 36.

Robert and Kim danced a 1980’s Argentine Tango to “Word Up” by Willis and it was very good but I didn’t feel the passion. It had some great moments and some awkward moments. But overall good. They scored 7,8,8,8 totalling 31.

Nastia and Sasha danced a modern Charleston to “Honey I’m Good” b y Andy Grammer and it was very good. I would of preferred more Charleston dancing and less moments in the not moving the feet moment. But what she was given was done very well. They scored 10,9,9,10 totalling 38.

Willow and Mark danced a futuristic Jazz Routine to “Electric Feel” by MGMT and it was good. I didn’t understand it….because it was futuristic…. They scored 9,9,9,10 totalling 37. 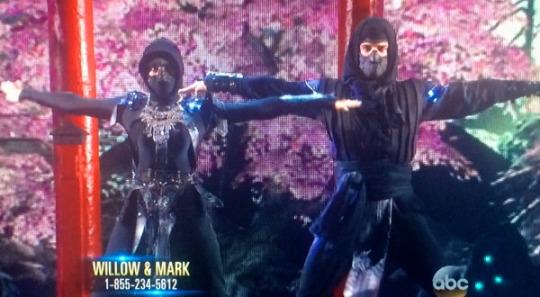 Immunity went to Nastia and Sasha.

Riker and Allison dance off against Willow and Mark with a Salsa. And they were both spectacular. Loved the music “Temperature” by Sean Paul. Riker’s was hot and spicy and Willow was light and fun. The judges voted and the winner is Willow and Mark.

Noah and Sharna dance off against Robert and Kim with a Cha-Cha to “Dance With Me” by Kelly Clarkson. Both had errors and both danced very stiff. The judges voted and the winner is Noah and Sharna.

Chris and Whitney dance off against Rumer and Val with a Foxtrot to “Orange Coloured Sky” by Natalie Cole. Rumer was fantastic and left poor Chris in the dust. Chris really needs to work on his frame. The judges voted and the winner is Rumer and Val.

Leaving the show tonight is:

I’m really sorry to see her go. She was fun to watch.