Dancing with the Stars: Week 10- The Finale

Posted on May 22, 2015 by Arthur Murray Woodbridge

DWTS: Week 10 – The Winner Is Announced and The Mirror Ball Awarded!

The people voted to see the freestyle of Riker and Allison… My choice too!!!

Riker and Allison did a quick spotlight in a jive and he looked like Derek, well them being cousins I guess it would happen sooner or later. 🙂

This seasons stars come back to do a quick highlight in their own dancing.

Rumer and Val danced a hustle for their quick spotlight.

Sia performed “Elastic Heart” and Julianne and Derek danced a Contemporary Routine along side two younger versions of them. This number was ABSOLUTELY amazing!!!

Noah and Sharna dance a fusion of Cha Cha and Argentine Tango. It was ok, he was back to lunging and stepping sideways again. I understand that he is inspiring but he can still move. They scored 9,9,9,9 totalling 36. 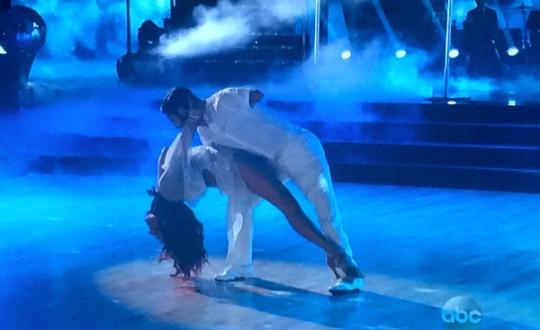 Riker and Allison dance a fusion of Salsa and Quickstep. It was amazing, I absolutely loved it!! I agree with Bruno “He is a multitalented power house of a performer!” They scored 10,10,10,10 totalling 40.

Rumer and Val dance a fusion of Foxtrot and Paso Doble. It was very good but I was under whelmed with the performance. They repeated their previous Foxtrot routine earlier and the sequence was repeated itself again. But overall she danced what she was given amazingly. They scored 10,10,10,10, totalling 40.

In third place is Noah and Sharna.

In second place is Riker and Allison

The Winner is Rumer and Val