Nick Kosovich is a professional ballroom dancer who specializes in American Smooth and International Dances.  Nick currently lives in Los Angeles.  He is also representing the USA as a judge in the “Second Dance World Championship” in Mexico.

Nick Kosovich competed on an international level for 36 years. Throughout his 36 years of competitive dancing, he has taken part in seven Professional World Championship events and won the United States American Smooth Championships and finished second place in the 2004/5 World Classic Showdance Championships.  He retired from competition dancing in 2005, however he has achieved many outstanding awards in his career.

Some of his achievements would include: 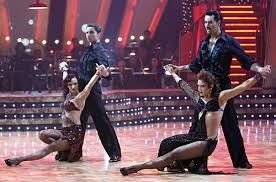 Although Kosovich is no longer a professional dancer on Dancing with the Stars this does not mean he isn’t working behind the scenes…Kosovich and his wife Lena have a costume manufacturing business called LeNique.  The two have made costumes for Dancing with the Stars, So You Think you can dance?, Dance Your Ass Off, Ballroom Boot Camp, America’s Got Talent, American Ballroom Challenge and thousands of dance competitors across North America.

This entry was posted in Coaches Coming!. Bookmark the permalink.